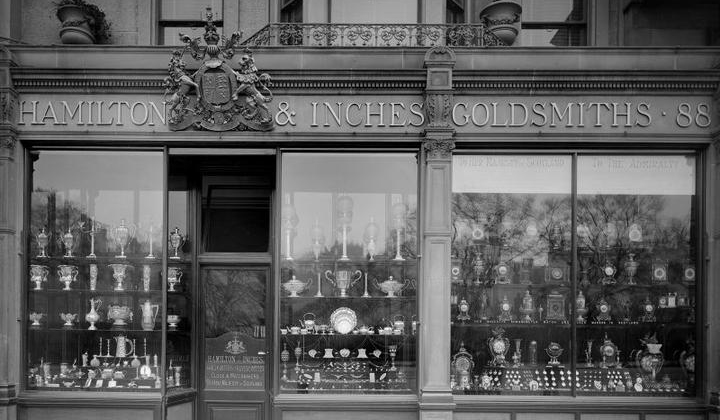 Since 1866, Hamilton & Inches has been Edinburgh’s premiere destination for fine jewellery, luxury watches and hand-crafted silver. We have maintained our jewellery and silver workshops since our inception and have held a Royal Warrant as silversmiths to Her Majesty the Queen for more than 120 years. We continue to offer a range of specialist in-house services including repairs, engravings and valuations.

Founded by Robert Kirk Inches and his uncle James Hamilton, Hamilton & Inches opened its first jewellery store at 88 Princes Street, Edinburgh in May 1866. When his uncle retired in 1883, Robert went on to incorporate the long-standing firm of Robert Bryson & Son, establishing Hamilton & Inches at the forefront of Edinburgh watchmaking and jewellery, and paving the way for the company as it is today. Soon recognised for the quality of our workmanship by Queen Victoria, we obtained a Royal Warrant in 1893 and some years later, in 1903, Robert Kirk Inches co-founded the Edinburgh Association of Goldsmiths, Silversmiths & Watchmakers, established to ‘to prevent firms from selling ‘shoddy’ goods and protecting consumer interest’. Our commitment to providing the highest quality goods to our clients remains central to how we work today.

Robert Kirk Inches not only played a pivotal role in the business community of turn of the century Edinburgh, but was a prominent figure in civic society until his death in 1918. He was elected to represent the Morningside Ward on Edinburgh Town Council in 1900. In 1912 he was elected Lord Provost of Edinburgh, a post he held for the duration of World War 1 and was knighted by George V in 1915. Following Robert’s death, the company passed to his son, Edward James Inches, who continued to foster the tradition created by his father and great uncle. He was later joined by his sons, first Campbell Inches and then his younger brother, Ian Inches. It was in 1952, under the ownership of Robert Kirk Inches’ grandson Ian, that the company moved to number 87 George Street. Number 87 continues to house some of the world’s finest watch and jewellery collections, as well as our exceptionally talented team of craftspeople. We are now the only Scottish manufacturing goldsmiths company to survive that can trace our roots back to the 19th century. Today, Hamilton & Inches continues to invest in the future of craft via the Hamilton & Inches Academy, whose sole remit is to educate and foster talent amongst the next generation of craftspeople. In this, we once again take up the mantle of Robert Kirk Inches, who was instrumental in helping to set up Edinburgh College of Art in the early 1900s and in establishing effective continuing and technical education for apprentices across the City.

On 26 April 2021, following an extensive regeneration project, we were delighted to announce our reimagined showroom opened.

With customer service at the heart of our business, work took place throughout our showroom, workshops and service department, restoring the building’s historic accents and creating a space that celebrates heritage whilst innovating with contemporary design.